Today marks 3 days since we’ve lost Robert Davis a.k.a SQLSoldier, one of the pillars of SQL Family community.
I was introduced to Robert many years ago at one of the PASS Summits. I had known of him as a SQL genius well before that. One of my good friends from the local SQL community had actually relocated to Seattle because he got an opportunity to work with Robert. After I got to know him, I befriended him on social media and followed what he said/did. I found him extremely kind, open minded, friendly and generous. Much has been said of all these qualities. I thought about what I would say here that has not been said yet..two things came to mind.
Robert had a native american ancestry. Like many other immigrants I thought native americans looked a certain way and to me he looked like any other caucasian I had seen. He could have gotten away with that really easily. But he took every opportunity he had to let the world know he was partly native american. And perhaps for this reason, he had a very sensitive and intuitive understanding of issues around racism and discrimination. I found him pretty extraordinary in that regard, and my respect grew in leaps and bounds for him.
The second thing I found – he believed in taking chances, in being happy at what you do, not just do it for survival. I went through a job situation some years ago, when I had to quit two jobs in quick succession for various reasons. The judgement around this is really harsh, especially in conservative south/midwest. Even when I tried to get some understanding from community on social media – responses were like ‘stick with it for a year’, ‘i will not touch your resume if i see that many short stints’, on and on. I was really disappointed and saddened – I believe in tenure myself, but was just going through a patch of bad luck when I could not make it last for reasons that had nothing to do with my ability or performance. Robert was among the few people who really got this and told me how important he thought it was to be happy and satisfied, and that noone else really needed to get reasons why I wanted to move on or where. He gave me confidence to do what was right for me, and not worry about what other people thought.

He was a movie buff, and one of the movies he enjoyed that is also my personal favorite is ‘Butch Cassidy and the Sundance Kid’. Whenever I find myself worrying too much about what other people think – I think of this classic scene from that movie, where Robert Redford and Paul Newman make an instinctive decision to jump off a cliff – yelling ‘Ohhhhh s….t’! I can see Robert smiling and nodding from above in approval 🙂 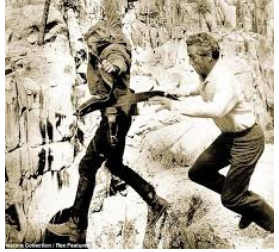 3 thoughts on “Ohhhhhh S…t!! A tribute to Robert Davis”