In this post am going to introduce into some of the basic principles of probability – and use it in other posts going forward. Quite a number of people would have learned these things in high school math and then forgotten – I personally needed a refresher. These concepts are very useful if we can keep them fresh in mind while dealing with more advanced programming in R and data analysis.
Probability is an important statistical and mathematical concept to understand. In simple terms – probability refers to the chances of possible outcome of an event occurring within the domain of multiple outcomes. Probability is indicated by a whole number – with 0 meaning that the outcome has no chance of occurring and 1 meaning that the outcome is certain to happen. So it is mathematically represented as P(event) = (# of outcomes in event / total # of outcomes). In addition to understanding this simple thing, we will also look at a basic example of conditional probability and independent events.

Let us take an example to study this more in detail.
I am going to use the same  dataset that I used for normal distribution – life expectancy from WHO. My dataset has 5 fields – Country, Year, Gender, Age. Am going to answer some basic questions on probability with this dataset.

1 What is the probability that a random person selected is female?  It is the total # of female persons divided by all persons, which gives us 0.6. (am not putting out the code as this is just very basic stuff). Conversely, the ‘complement rule’ as it is called means the probabilty of someone being male is 0.4. This can be computed as 1 – 0.6 or total # of men /total in sample. Since being both male and female is not possible, these two events can be considered mutually exclusive.

Results are as below..as we can see, the highlighted probability #s are very close suggesting that these two events are largely independent. 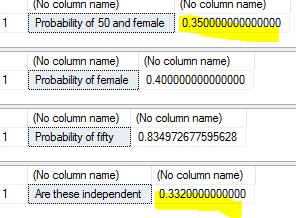 From the next post am going to look into some of these concepts with R and do some real data analysis with them. Thanks for reading.

One thought on “Basics of Probability”