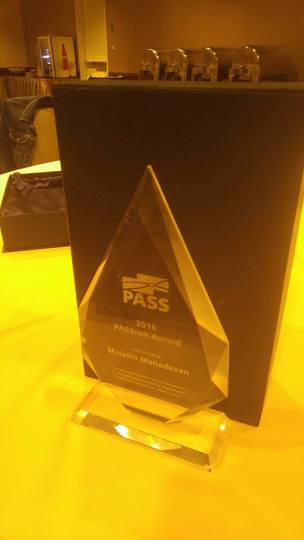 2016 is going to be a special year in my life. There was an article on Oscar awards a while ago – on reasons why the oscar is the most watched awards ceremony around the world. No, it is not just because of movie stars. Everyone, secretly or publicly – longs for their ‘oscar’ moment. The moment when the world (or the equivalent of the ‘world’, a lot of people) would get to see who they are and what they did, and give them kudos for it. Not all of those people get to achieve that moment.

Many of us do not work in environments that are exposed to public scrutiny. Some companies offer ‘outstanding employee’  awards which come close to a form of public recognition- but are usually ridden with politics in how they are awarded. Personally – I have received two awards like this in places I worked at – I promptly got rid of the trophies after I left their employment. There was too much jealousy/back stabbing and politics surrounding it, many of which was revealed openly and not even private or polite. The memories associated with these were not pleasant or rewarding – and it often felt like a feeling of awkwardness for a long time later. I do not say work related awards do not mean anything – they do and must be appreciated, but they also do generate a lot of tension and politics in most places. The need for recognition and having ‘oscar moments’ though, is human and universal. Some people are able to get it met. For others, we have to dig deeper to find other ways of getting our needs for recognition – or , perhaps do work that is its own reward.

Part of the reason I started to work in community was that it was proactive work or service to people. It has no titles attached, no $$ attached, and it is a lot of hard work. It is work with people who  do it because they enjoy doing it and nothing else.I wanted to be around that kind of people, and I wanted to grow that feeling in me – of finding rewards in what I do, not waiting for someone to call me out or give me something in return. This year was 10 years since I started the Louisville SQL Server User group – which started in the public library in 2005 with 12 people in attendance. Soon after that I also started running SQL Saturdays, we clocked 8 of them this year. I can’t claim to have been supremely happy all through these years – i’ve had my frustrations and low moments with it, but I did get a glimpse of doing work for the joy of work alone, serving people and working with others who thought and believed likewise.

My  oscar moment came without asking – during the summit this year. I was given the PASSion award – the highest honor for a PASS volunteer for outstanding service, this year. The award was presented by PASS president Adam Jorgenson at a ceremony in front of a huge audience of 5000+ people. I was congratulated by hundreds of people – many of whom I do not know or have never met personally. It was a huge, huge honor and one that am still coming to terms with. There are many people I want to thank for this..the list is long, but there are some I can and must single out – as people who have inspired me to stick with community work as its own reward.

Kevin Kline – one of the founder leads of the PASS organization itself – he has educated me with many stories of the hard work and thought that went into the early days of the organization. He is always there for me as friend, mentor and guide.
Karla Landrum – would have been impossible for me to run so many events without Karla’s rock solid support to lean on. I’ve cried on her shoulder many, many times when I’ve been frustrated and tired – she has been there for me always as a true friend and guide. I will miss her dearly in the years to come.
Rob Farley – when I had some real moments of frustration some years ago with things not going well – Rob helped me understand the real purpose and meaning of community work, and to remember that it was often meant to be its own reward. Rob’s sense of humor and spirit helped me persist with what I was doing and got me where I am today.
Jes Borland – I met Jes on SQL Cruise six years ago. She and I are as different personalities as chalk and cheese (she is the cheese in that anology) – but she is on top of the list of SQL women I look up to – for sensitivity, understanding, guidance and just pure fun.

Thank you to all of you, and to the PASS Organization – for making my oscar moment happen. Not everyone gets to experience it – it is life altering, and it is a blessing of pure love and regard that is very hard to find elsewhere. I am humbled and hope to continue to live upto it.