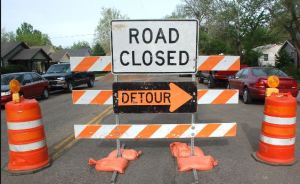 When I was new to driving in the States, one of the signs that would make me end up with a panic attack was the ‘Detour’ sign. I grew up in a community that was largely pedestrian, and I developed my road sense mostly by walking. If I walk down a street – chances are pretty high that I will remember that street for some time. Many americans have the same kind of road sense with driving. I was not born here, I learnt to drive much later in life and did not have that. So, in the pre GPS days – whenever a sign appeared that said ‘Detour’ – I would have a panic attack. I did not know the alternate road and where it joined up with the one I was on. I did not know where it would take me and how I would find my way back to where I was supposed to go. But the detour signs did not stop appearing because I did not like them. I had to find a way to develop a better road sense – it would never be as evolved as the one I grew up with but I needed it for sure.

As far as career choices go – I had similar issue a couple of years ago. I had quit my stable DBA job which I had for 6 years and made a move to another position in a company that was being bought out. The writing was on the wall that many of us would be let go soon and I had to find something else quickly. In addition to that – I was in a serious car accident and suffering PTSD which was causing severe insomnia, amongst various other issues. I had no energy to get acclamatised to a completely new and stressful work environment. So I went with what my heart told me, picked up the phone and called a friend from the company I had left. He was not a SQL guy, he managed the windows team there – he had a spot open on his team, for someone who could do Systems Center operations manager, among other things. They had newly acquired SCOM and SCCM and were having a hard time finding experienced help. SCOM is a product closely married to SQL Server – I saw an opportunity to help, and I loved the people I was going to be working with. So I took the job, and worked it for a year and a half until I quit a week ago for another promising DBA position. There were many things I learnt during this career detour –
1 Most SQL folks I know suffer a sort of a paranoid attachment to their work – ‘I can only do SQL Server and nothing else’. Even the mention of Oracle or MySQL is intimidating and is met with ‘no no, not my area of interest and so on’. Some of the fear is valid – Oracle for example is not an easy product to learn and there is no point pretending you can just learn it as you go and get somewhere with it. But some of it is just resistance to change. There are many products married to SQL Server – like SCOM. Or SharePoint. There are many other database products that are relatively simple to learn – like MySQL. So it is important to look at our resistance to branching out into learning other stuff.

2 My good friend Brent Ozar often says that it takes upto 10,000 hours of dedicated learning to learn anything and get to expert level. I learnt from him not to have that expectation to begin with unless I had the luxury of that kind of time – it was important because setting goals too high and then failing was sort of a self sabotage too that was hindering my growth at many levels. I developed some skills with SCOM – by no means expert level but I learnt good scripting on vbscript and a basic level on Powershell. I also learnt a lot of things around monitoring – including the fact that generic monitoring tools can do certain things and we need deeper monitoring tools mostly for other things. Also to develop dashboards and metrics around mining a monitoring database – and how useful that can be to upper management if they are willing to exploit it.

3 I kept a constant eye though on my main area of expertise – SQL Server and database technologies. I kept up my learning with viewing courses on Pluralsight, PASS Summit recordings and attending sql Saturdays/user group meetings. I learnt after a certain period of time that becoming a SCOM expert was not something I really wanted to do and got back on track with SQL Server again.

By far the most valuable lesson I learnt though – was similar to the one I learnt on the road. Not to fear detours. They can and they will happen. To develop a ‘road sense’ of where I am, and where am going, and how my path will sync up to the one I was on. It has left me with renewed confidence in myself and my ability to handle life as it comes.